Host ASP.NET MVC Application in a Windows Container in Docker

First, we will create a new image based on the official IIS image released by Microsoft. Because in that image features such as ASP.NET 4.5 and Microsoft Web Deploy are not installed by default and we need to have it for deloying our application. So download the installer package for Web Deploy from the Microsoft site and store it in a folder in your local machine. To create the image I have created a Dockerfile as given below

Let's create the image by executing the following command

When the command is executed, it will first check whether image for IIS is available in locally in docker and if it's not found then will download it from Microsoft repository in Docker Hub. The second statement in the file is for installing the ASP.NET 4.5 feature and once that is finished it will create a folder named install in the container and then copies the installer package for Web Deploy which we downloaded earlier into it. After that msiexec process is called using Powershell to install  Web Deploy inside the container 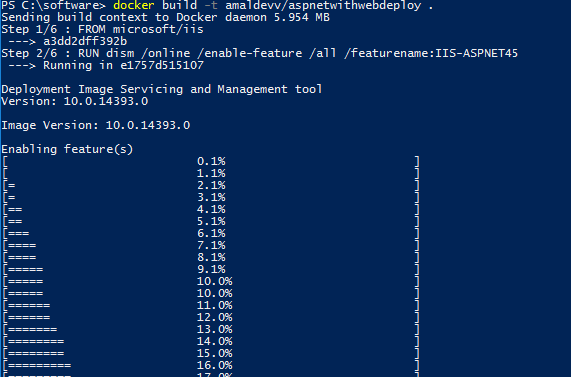 Let's now create the image for our application based on the image we just now created. Please note that we will be using the custom image which we created instead of the microsoft/iis image because we need to enable ASP.NET as well web deploy package in the image to host an ASP.NET Application. I have already created an ASP.NET MVC application in my local machine using Visual Studio and created Web Deploy Package using the Publish feature in Visual Studio. If you are not familar with this step, please refer the offical documentation here.

Given below is the Dockerfile which I used to create the image for our ASP.NET MVC application

The steps are pretty straight forward,

1. Uses the custom image as base image

2. Create a new folder named web application and sets it as current directory

3. Copies a powershell script file to the current working directory, I will explain the contents of it later in the post

4. Copies the web deploy package files from the local machine to the current working directory in the container

6. Executes the powershell script from the file we copied in Step 3

So after some googling found this powershell script to fix that issue from here. The contents is given below

As mentioned in the fix, I need to execute the deployment package again to successfully create the image and that's why I am executing it again in step 7.

To create the image, execute the docker build command as given below.

Step 3: Run the Container to serve your application.

Once your image is successfully built, you can use the following command to create the container which will host the application in IIS inside the container

The above command will create the container and -p switch will ensure that all the requests coming into port #80 of your local machine to the port #80 of your container. If you experience connectivity issues, make sure that you expose the #80 if are running it in a VM azure or if your are behind any firewall